The performance is always new, just like any moment in human life. 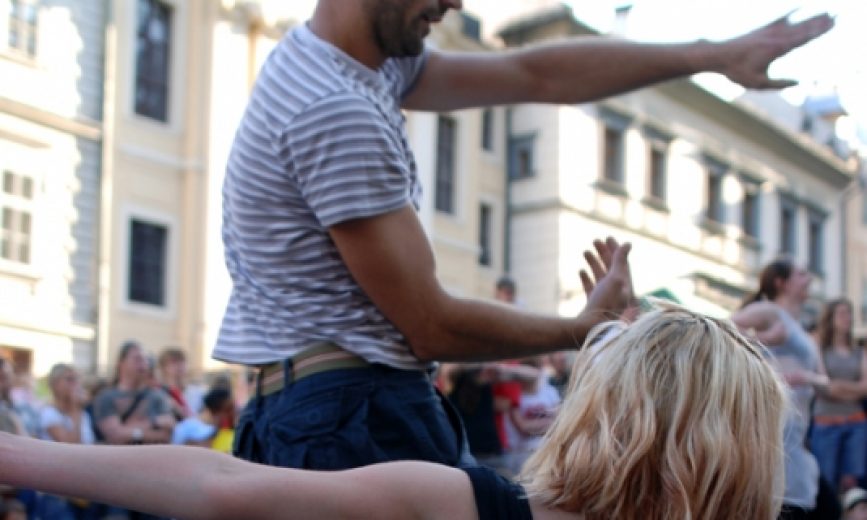 Duration: about 20 to 50 min. / According to the agreement

The performance is always new, just like any moment in human life.

Touch the dance is not a typical performance from the theatre’s repertoire.  It is a “site-specific” project based on a free combination of choreography and improvised movement, which absorbs and accepts the atmosphere of a place.

In the performance, the title of which partially reveals its mission, the dancers experiment with the authenticity of a place, get inspired by its aesthetics, reflect its history, breath in the atmosphere and communicate with the surroundings and the audience.  Thus, directly before the eyes of the viewers, a creative process is born where the dancers’ movement is stimulated by the momentary condition of their body; it comes from the contact with other dancers, from the space in which the performance is taking place, from the play of light, and the like.

VERSION OF TOUCH THE DANCE

Short sequences of the performance are a game with movement and energies, where space can provide its own story; viewers are given some room for imagination and involvement in the creative process, thus getting an opportunity to use their own experience in shaping the choreography itself.

The project is performed for any age group, in various exteriors or unusual interiors, in day or night, with or without light effects.

The professional dancers of Štúdio tanca theatre in Banská Bystrica have been doing this type of performance on a very high interpretive level for a number of seasons.  The final content and form of the performance provide a complex and unique experience containing a series of on-site sensations and inspirations.

This is a unique version of an improvised performance, tailor-made for children.  In addition to dance improvisation, the project is based on interaction – the children can freely enter the performance at any time.  The cooperation of the dancers with children takes place either with the help of theatre props (e.g. the three-headed dragon from the fairy tale About a sister seized by a dragon) or without them.

VERSION OF TOUCH THE DANCE (I CELLA)

We extended our programme offering with a version which is quite attractive for the audience – performing in an intimate atmosphere with live music played by Slovak violoncellist Jozef Ľupták, who is one of the most significant representatives of contemporary Slovak music. In 2010, he received the Award of the Minister of Culture of the SR for artistic achievements in the field of solo interpretations as well as for his dramaturgic and art-organisational activities.