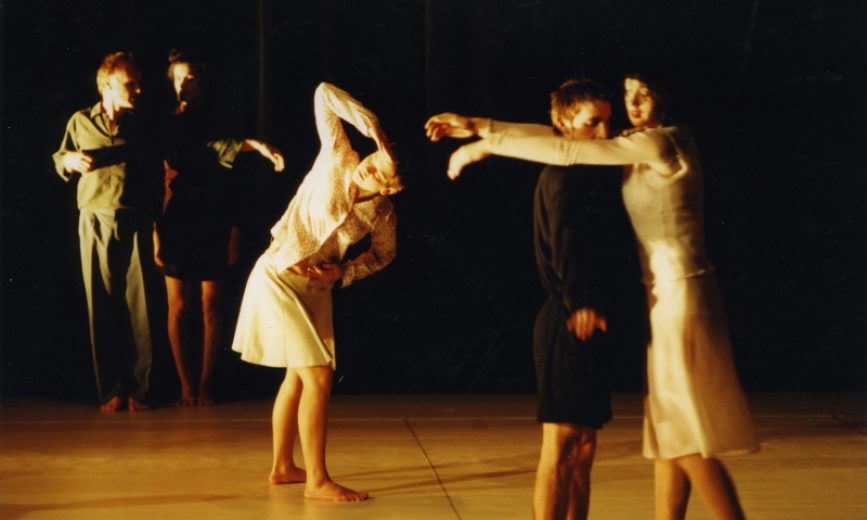 Is about intimacy and revelation,

Is about time and relations,

Is about people and the space between them,

Is about changes and about how they themselves change.

Something between us is a dance project which was designed under the supervision of Julyen Hamilton, an English dancer and performer.  The idea of a joint project with Štúdio tanca theatre had come about in the course of the 3rd international contemporary dance festival – Dance Today 1998, where Julyan Hamilton’s group presented their dance performance Libro.  Zuzana Hájková and Julyen Hamilton, joined in discussions and followed their strong intuition which signalled the closeness of their opinions and the potential for a creative work of dancers.

Štúdio tanca theatre put on the stage as many as three series of this performance.  The project is interesting in that it is based on both the dialogue between the dancers and the audience, and the dialogue among the dancers themselves. The whole performance is in fact a movement improvisation.

The dance reflects the dancers’ response to various impulses which come from their body or another dancer, from the audience and their mood, from changes in light and music. The dance improvisation is common in foreign countries, but it is something unique and timeless in the Slovak dance environment.

Štúdio tanca theatre introduced a number of interesting visiting guests within the project Something between us, for example well known dancers such as Marta Poláková or Milan and Zuzana Kozánek.  The theatre presented this performance in Banská Bystrica and also in Zvolen, Piešťany, Banská Štiavnica and Bratislava.

“… The final shape is an exceedingly interesting tangle of components delivered by both dancing communities (in addition to his own dancing, Hamilton also made use of his wife who danced at the premiere).  There is nothing on the stage but lights.  Impulses for dancing come in gradually.  It is the McFerrin-like music, or the light, either brightening or dimming; furthermore, the impulses come from dancers’ mutual body contacts which are followed either by their separation or impulsively finding their way to each other.  African tribal dance, west-European postmodern dance but also Slavic folklore (sic) are present on the stage at the same time. The ‘relaxing moment’ comes in the middle of the performance, with frames and figures created by light on the stage, remotely resembling the images from Renais’ films.  Something between us is another successful performance by Štúdio tanca theatre.  The impulses come gradually to the spectators, but with an increasing intensity is the audience pulled into the ‘tangle’ of the performed ‘story’. (Jozef Poliak, daily SME, Dec. 18 1999)

“…By this project, Štúdio tanca theatre has forged to a completely new line of their art work.  The Slovak audience is not exactly prepared to view such experiments, but this performance is definitely worth seeing.  And Julyen?  He told us we were better because we put our heart in the dance and allowed him to walk directly into its centre…”