The story of a man on the road, that takes him to suprising places. Man is experiencing unusual things like as someone doesn´t want to get there, where he is going. It is only on his decision, if his journey becomes a nightmare or carthartic return to original point. 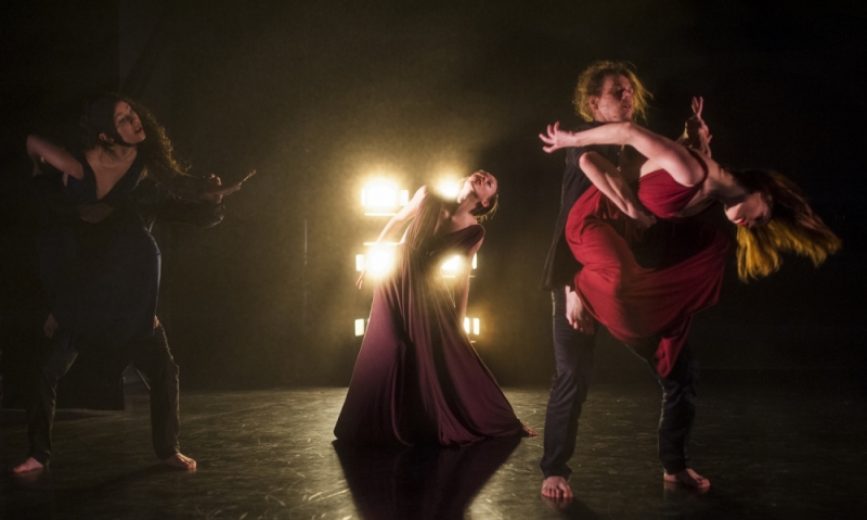 We come back home constantly to leave it again. We are pleased by returns, even when sadness and nostalgy are hidden inside. We need to go thru big initiatory ritual process, so we could manage the metamorphosis "butterfly-eclose". But it's up to us if the result is colorful butterfly gem or a grey moth." (words of music author)

Roots is present execution of man's lifeline. Performance drags the audience into the dark world by classical story. Into the world, where everything takes place as behind the veil. The veil, that keeps man from seeing things real, direct and makes an illusion that isn't possible to catch and materialize. Story inspired by Antique period is about strength of man and his determination to resist constant allurement to stray.

Stanislava Vlčeková
works as independent choreographer, dancer and dance teacher. She has worked with choreographers and directors of great importance. Her teaching and interpretative skills are continually developing by internships and workshops of D. Zambrano, S. Paxton, L. Nelson, J. Hamilton, E. Farro, H. Diaznas, M. Kozánek, P. Jaško, atc. During her studies she started to work and create with choreographer Zuzana Ďuricová Hájková in the Štúdio tanca dance theatre in Banská Bystrica as performer and dance teacher in techniques of classical and contemporary dance. In past she worked as co-founder, co-author and dancer in MY3 company (together with Renáta Bubniaková and Lucia Kasiarová). She worked with SkRAT theatre, theatre elledance and with personalities of theatre and movie. She is an essential member of physical theatre Debris company as choreographer and performer. As choreographer she worked on various theatre productions with many prestigious Slovak directors and made the choreography of Debris company's Soliloquy (2005) with Jozef Vlk as music author; Dolcissime Siréne (2007); Ortopoetikum (2007); Hexen (2010); Between a rock and a hard place (2010); MONO (2011); Cradles (2012); EPIC (2012). She won several awards – Jury award of 12th Saitama international Dance Contest in Tokyo for co-authorship of choreography for MY3 company, TAOS award – Dance personality of the season (in 2009), third place at Festival of choreographic miniatures in Belgrade, Serbia (2012) for choreography of Rose for Ballet Bratislava. Her activities exceed even into the movie production (movie "Voices"/director P. Babjak, "Canto Hondo"/Tv version of performance for Slovak television), "Good night" and "M is for malnutrition" director P. Cikrai.

The dance project of Debris Company brought a collage of feelings, perceptions and dance art on a high professional level, which is during the fifteen years of theatre existence often demonstrated. And the relationships are perhaps the most important. In the piece, dancers presented their "Homer" charged of passion, emotions, with efforts to understand and subsequent disappointment. If you believe that you can talk about human life without the reading Anna Karenina or Dostojevsky´s masterpiece, go to watch a Roots. It is a dance about the life in the most direct, the most sensitive and the most frightening sense.

Dagmar Skařupová: ROOTS: Dance about the life in the most sensitive and the most frightening sense. Dennik Pravda 1st of March 2015

The production was created with the financial support of Ministry of Culture of SR.