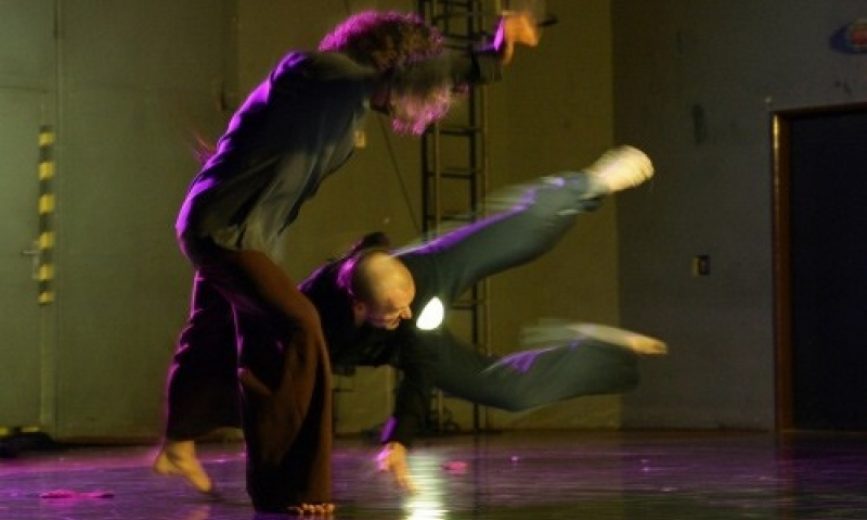 A physical theatre performance that seeks to find and overcome the borders outlining the relation between the human body and its gender.  Stories dominated by movement and character…. Transformation of situation and body…. How far can our body go and to what extent it can convince the audience and itself about an adopted identity?

“…The first and the longer part of the evening belonged to the performance Muscosus by Tomáš Krivošík.  It is framed as a picture of clear atmosphere and relationships – two men earnestly beating each other’s backs and three women who are slowly as seals moving towards them.  It is as if Krivošík paused before beginning to choose from a great abundance of material.  Less is more – a trite but true slogan which is one hundred percent valid in this moment…  The performance by Anton Lachký, entitled Inner eye, has a clear plan, with a dominant solo, trio and quintet.  There are many strong images arising mainly due to the contrast in dynamics, lights or movement in the Lachký’s performance…” (Eva Gajdošová, Sme, 3/20/2006)

In addition to home stage in Banská Bystrica, Inner eye was performed:

at the festival of contemporary dance Bratislava v pohybe (Bratislava in Movement);

in the Synagogue in Šamorín;

in the Andrej Bagar Theatre as part of the festival Tanec v Nitre (Dance in Nitra);

in the Slovak towns of Poprad, Brezno, Zvolen and Vranov nad Topľou.