When people fall in love, when they long for beauty, when they truly feel that each moment of their life is lived – this all represents the foam of the days. 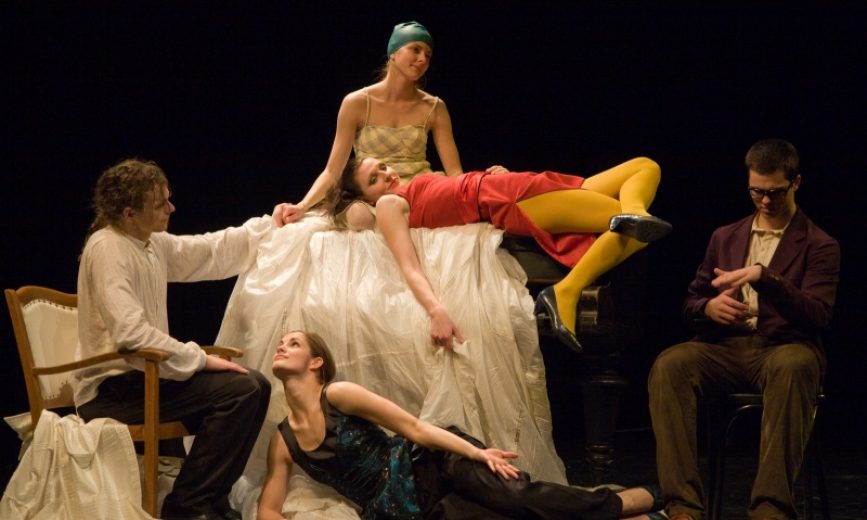 When people fall in love, when they long for beauty, when they truly feel that each moment of their life is lived – this all represents the foam of the days.

This dramatic dance production, freely inspired by the famous literary work of Boris Vian, successfully leads theatre’s repertoire into new territories.  Expressed in one word, the performance Foam of Days is about love.  It is full of typical playfulness, humour, slight irony and metaphors, with hints of Dadaism and Surrealism.  The atmosphere of the story is playful and optimistic at the beginning; gradually, however, it begins to darken.  Distress is likely to spread over the viewers, just as it spreads over the main characters of the story…

Via cooperation with a renowned drama director, Jakub Nvota, Štúdio tanca theatre continues its tradition of successful projects from previous years (Flying Frida/Ondrej Spišák, Black Tomcat/Michal Náhlík), where the creative potential of both verbal and non-verbal theatre are linked.  The performance is full of original music and stage elements, along with truly interesting interpretation acts by the dancers.

“When people fall in love, when they long for beauty, when they truly feel that each moment of their life is lived – this all represents the foam of the days. Elusive moments which make us willingly and happily die for the sake of beauty. The rest is just a pure emptiness. The long-lasting, never-ending misery and vanity of the era are killing us.  We experience both Heaven and Hell at the same time, as if simultaneously. What makes the difference is love!

The gloom of existence boosts the intensity of the experience of love. Love is inviting us into its world – to the foam of the days. If there is too much of it, we are deprived of the strength to resist the everyday evil. We are walls that burn down. But, how beautifully!” (Jakub Nvota)

Jakub Nvota (1977) founded The Wandering Theatre (formerly called The Student Theatre), together with Kamil Žiška. Since then he has been writing, directing and performing there, enjoying cabaret and street theatre the most. He studied theatre direction at the Academy of Performing Arts, and has made his living directing for the last few years. He has cooperated with a number of theatres in Slovakia and the Czech Republic. His favourite plays include: Jááánošííík after 30 Years (RND), Belzebub’s Sonata (BDnR), Illusionists (Štúdio L+S), Hugo Karas (DJGT Zvolen), Inspector – Revision 07 (Municipal Theatre, Žilina), Othello, Garrotter of Venice (Puppet Theatre, Žilina), Decameron (Municipal Theatre, Zlín, CR).  He has also long been cooperating with the theatre group Frída from Brno.  In the Czech Republic, he was the author of the lyrics to the chanson CD of Ema Márová (Obchodnice s noční můrou/Trading with nightmare).  He loves writing song lyrics and scripts, and he is the co-author of a number of cabaret plays. Together with Kamil Žiška, he published a book Piano Revue in May 2007. The book contains a play script dedicated to Jiří Voskovec and Ján Werich.

“The Foam of the Days is an unusual, poetically gentle and tragicomic dance performance, which makes use of some features of grotesque. The love of two couples Colin and Chloe, and Chick and Alice, dominate the eight chapters selected from the book for the performance.  In the moment the poetic nature of the language would become too hard for acting (while the acting of the dancers is intentionally minimised), dance solos or collective etudes, being strongly emotional, enter into the story. They perfectly replace the text; and not only that, they turn each chapter into a separate episode…”  (Review by Mária Glocková, daily SME)