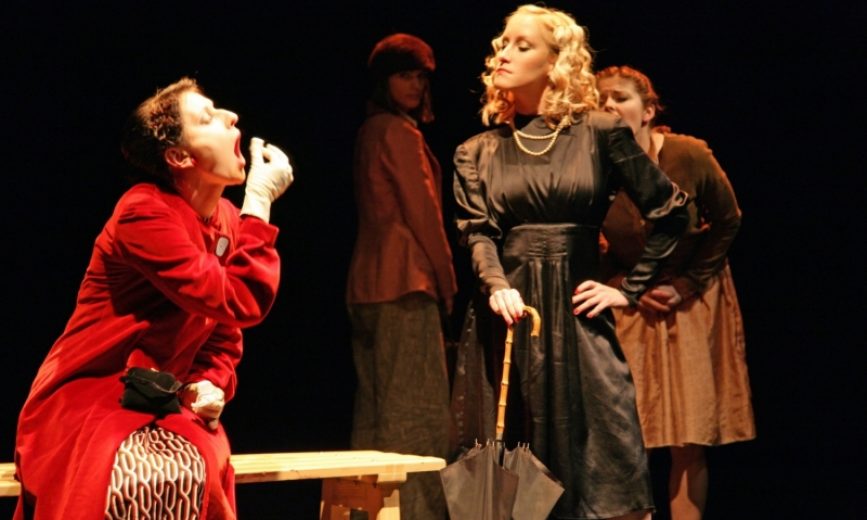 Be Bop is the title of a dance performance inspired by a musical movement of the same name, which arose in the forties of the 20th century as a small revolution, liberating music forms from their strict traditionalistic structure and greatly influencing a many artistic disciplines.

In this performance, people are dissolved in sweet idleness; they get into situations in which they are forced to become aware of the extremes offered by life in the real world. As a result, they find themselves put together willy-nilly in a deep cellar filled with fear, where they are unable to successfully shape their mutual, maybe pretended, solidarity.  Neither can they cope with their own quixotic nature, self-exhibition, desire for pleasure and fulfilment of their basic instincts.  They each, on their own, improvise, express meanings and search about, while saddened by their characters. In the end, they all reappear in the place from which they earlier escaped and find something absolutely new and important.  In this sense, BE BOP is an existential play.

…However, the characters of the heroes remain unchanged – the femme fatale with an umbrella, blond hair, blood-red lips, in a black sexy dress, although losing one of her stilettos, maintains her authoritative and seductive role. The artist saves herself by creative writing, even if only into dust; her movement is even more relaxed and open than before.  The elegant lady in a red coat does not lose her style; not even when harming others out of desperation. And the innocent girl is gathering her courage in small doses…

…The contemporary dance technique presents itself in the performance in a great diversity; not missing are physically strenuous and vivid parts as well as a sad happy-end, revealing that fear shall remain a part of their lives for ever. The tragedy provides each character with an opportunity to look inside the darkness of their inner self and unveil their being to the core…